From one woman to a political movement

In October 2005, South Australian Senator Jeannie Ferris was diagnosed with ovarian cancer.  Passionate about supporting women like her, she became an active participant in the Senate Inquiry Committee on gynae cancer.

This Committee was driven by her sense of purpose to find a cure for gynae cancer. The late Professor Robert Sutherland AO, then Head of Cancer Research at the Garvan Institute of Medical Research, gave an important insight into the reason why gynae cancer research was lagging behind research in other areas.  He told the Inquiry that many young researchers were forced to direct their careers to other cancers, such as breast or prostate cancer, because more charity money was available for research in those areas. 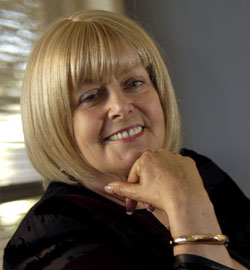 Adding more voices to the cause

Senator Ferris knew that we were missing out on the best and brightest minds we needed to find a cure for gynae cancer.  Her last inspiring speech to Parliament in 2006 was to deliver the Committee’s report: “Breaking the Silence: A National Voice for Gynaecological Cancers”.

Her passion created real change.  As part of its response to the report, the Federal Government committed to the establishment of a National Centre for Gynaecological Cancer to replace the National Centre for Breast and Gynaecological Cancer.  The Centre provides education and increased awareness about gynae cancers among medical and allied health professionals, and operates under Cancer Australia.

In April 2007, Jeannie Ferris sadly died of ovarian cancer.  Her last speech in parliament was a rallying cry about helping women with gynae cancer.  And though she   couldn’t be here with us, Jeannie’s legacy and passion for the cause lives on.

Before she died, she confided in Professor Neville Hacker that her vision was to go one step further and establish a national Foundation to raise money in Australia for research into all gynae cancers.

Jeannie knew that with proper fundraising and strong community support, we could get the outcomes we needed to save women’s lives. Her last wish was to support researchers so that future women could be cancer free.

Inspired by Jeannie, Professor Hacker discussed the concept of a national gynae cancer research foundation with Professors Andreas Obermair, Michael Quinn and Michael Friedlander.  With their enthusiastic support, he made the moves to start the Australian Gynaecological Cancer Foundation in 2011.

This would be a foundation that focused on scientific research.  With some of the best and brightest minds in Australia, all we needed was better financial support from organisations, philanthropists, corporate sponsors and individuals – so that those researchers could realise their full potential and help women like Jeannie.

The AGCF is born into this world

By 2014, the AGCF had a fully functioning Board of Directors, chaired by Jean Kittson, a Scientific Advisory Committee, chaired by Professor Michael Quinn, and a growing list of supporters.  We also became incorporated as a public company limited by guarantee in Australia, and an officially registered charity endorsed by the Australian Tax Office.

We were born wide-eyed into this world on 27th May 2015, with a launch at Parliament House in Canberra by the then Federal Health Minister, the Honourable Susan Ley.

Now, we strive to continue the legacy of Senator Jeannie Ferris and support researchers in their quest to cure gynae cancers.