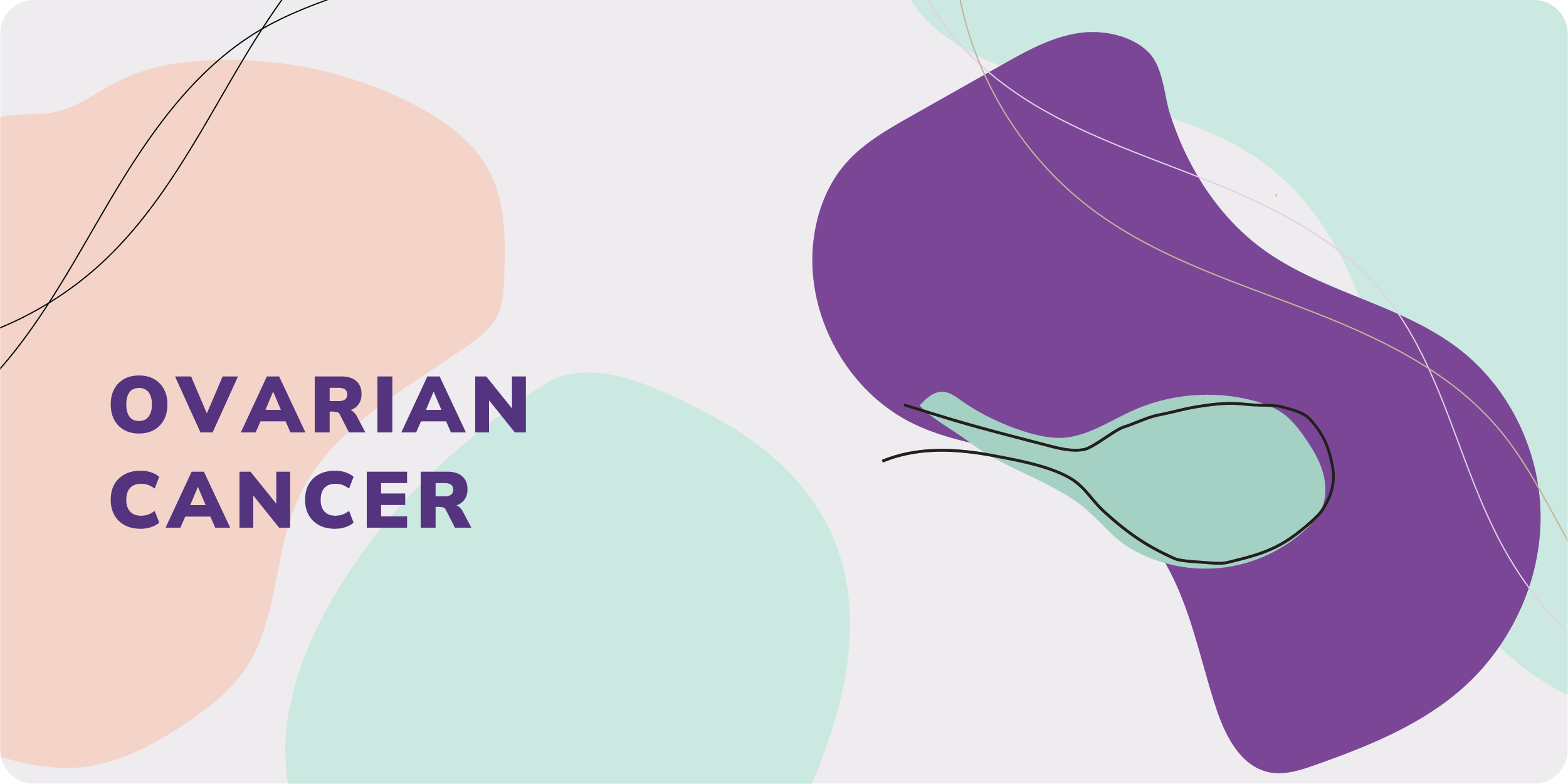 The ovaries are found inside a woman’s pelvis, loosely attached to the pelvic wall and to the uterus.  Each month from puberty until menopause, one of the ovaries produces an egg in a tiny bubble of fluid called a follicle.  In the middle of each menstrual cycle, the follicle bursts and releases the egg into the fallopian tube (ovulation), where it may be fertilised by a sperm.

Ovarian cancer is the leading cause of death from gynae cancer in Australia and the sixth most frequent form of cancer in women worldwide.  The average age at diagnosis is 63 years, and the chances of a woman developing ovarian cancer before the age of 85 are 1 in 79.

Ovarian cancer has been called a “silent killer” because it typically causes few early symptoms and is usually not discovered until it has spread around the pelvis and abdomen.  The 5-year survival for ovarian cancer is about 48%.

Around 5% of ovarian cancers have spread to the ovaries from another area in the body. The most common primary areas are the breast, stomach and bowel.

Until a screening test has been developed for early diagnosis, we’ll be left with the reality that most women with epithelial ovarian cancer will be diagnosed with advanced disease.

There are three major types of ovarian cancer:

Epithelial tumours account for about 80% of ovarian cancers.  They’ve been thought to start from the cells on the surface of the ovaries, and cells lining small cysts near the surface.  Recently, it’s been found that some of these cancers, especially those in women with a hereditary predisposition to ovarian cancer, begin as cancerous changes in cells in the end of the fallopian tubes.

Epithelial ovarian cancers vary in the rate they grow and spread (i.e. in their degrees of malignancy), but about 20% are very slow growing tumours, which are usually still confined to the ovary at the time of diagnosis.  These are called borderline or low malignant potential tumours.

The specific cause of ovarian cancer is unknown.  One theory is that continuous ovulation, and the subsequent repair of the open follicle, may make the cells vulnerable to DNA damage and to uncontrolled growth.  Both pregnancy and combined oral contraceptive pills prevent ovulation, and both are associated with a lower risk of ovarian cancer.

Another theory is that cancer-causing substances may enter the body through the vagina and pass through the uterus and fallopian tubes to the ovaries.  One possible cancer-causing substance is talc.  Particles of talc, in powder used to dry the genital area, may potentially pass up through the uterus and tubes and irritate the ovaries.  This could explain why removing the uterus (hysterectomy) or blocking the fallopian tubes (tubal ligation) lowers the risk of ovarian cancer.

A woman with hereditary cancer usually, but not always, has a strong family history of breast, ovarian or bowel cancer.

The most common germ cell tumour is the dysgerminoma, which is the equivalent of the more common testicular seminoma.  Other less common types include the immature teratoma, endodermal sinus tumour, embryonal carcinoma, and choriocarcinoma that is not related to pregnancy (non-gestational).  Some germ cell tumours are mixed types.

Germ cell tumours grow quickly, and the woman usually reports lower abdominal or pelvic pain. About 70% of germ cell tumours will be stage 1 at the time of diagnosis, and most will only affect one ovary.

Surgical management will usually involve removing just the affected ovary and closest fallopian tube (unilateral salpingo-oophorectomy). The uterus and the other tube and ovary can be left, so the woman can have children.

These cancers are very sensitive to chemotherapy and have a good prognosis even when spread beyond the ovary.

Granulosa cell tumours usually produce the female hormone oestrogen.  A woman with this tumour is likely to have irregular menstruation or, if she’s passed through menopause, abnormal vaginal bleeding.  The oestrogen may stimulate the endometrium, and about 20% of these tumours have an associated endometrial cancer.  A girl may develop a granulosa cell tumour before the age of puberty and the hormone secretion may cause early onset of menstruation and breast development (precocious puberty).

Sertoli-Leydig cell tumours can produce male hormones, such as testosterone.  A woman with this tumour can develop male characteristics such as facial hair growth, a process called masculinization or virilisation.

Stromal tumours are slow growing and are usually confined to the ovary at the time of diagnosis.  After removal, a woman has a good chance of being cured, and an excellent chance of living a normal life.  Some stromal tumours may recur, but their progress can be monitored with a blood test called inhibin or anti-mullerian hormone.

For more information about ovarian cancer, click the logo below to visit the Ovarian Cancer Australia website.